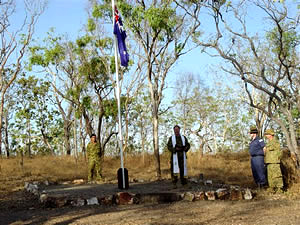 The personalised tour is fully guided with full commentary, part driven with short walking diversions to various infrastructure and to view collected artifacts from the site. Low fitness level required. Tour Cost $60 and departs 8.30am or 3.00pm - bookings are necessary.

The tour begins at the front gate where the taxiway from Pell Airstrip was used to bring aircraft within the camp and place them along various revetments. These can be viewed, plus the well developed road system and drainage.

The drains were often hand dug and the stone work at the under road crossings is another feature.

The work area begins close to the Pell strip and we also view the gun emplacements, which were a secondary consideration, but built after a bombing raid in 1943.

There are features all the way to the barracks area where the infrastructure is considerable. Besides the usual amenities there remains distinctive design differences for three mess buildings.

Tent sites surround, with officers having the higher ground around the barracks and parade area.

Some sites show great effort to make them distinctive, decorative.

A collection of items located on the area has been assembled, with some aircraft parts having part numbers and other items of obvious use. 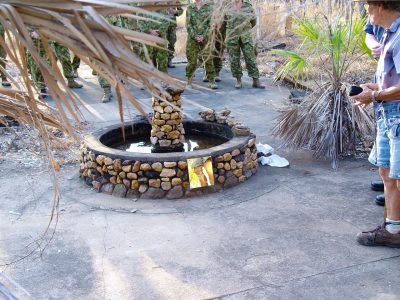 Fountain in the Officer’s Mess 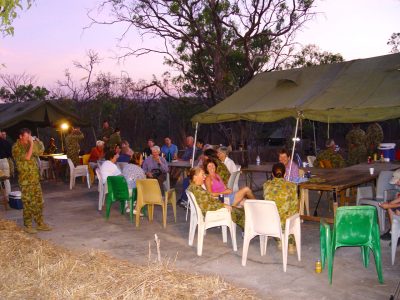 There is evidence of the water supply piped not just to the camp area but well beyond to work areas- there were two bores, one of which is utilised currently.

Walter Venn, author of “Restore to Service” a history of the unit in the NT visited in 2000, and made valuable comments. As well, instrument maker, Bill Clark stayed at the property in 2009 and gave additional comment about the working life here. Both men have now passed, leaving a legacy fostered by their war experiences.

At morning tea-time /afternoon tea-time tour participants will have the opportunity to appreciate the additional memorabilia on display – Gartcraig bricks from Scotland ; South Yarra firebricks; Vesteys abattoir blocks. How did these get to the Pell facility? 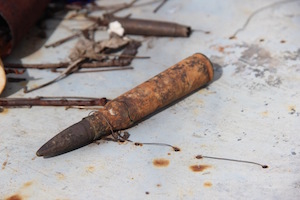 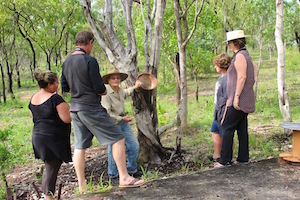 The tour is enhanced by recounting stories from the actual happenings within the unit. This is enabled by reference to Walter Venn’s book, "Restore to Service”. Walter was with the unit for the whole of its time in the NT and return south, and visited Pell in 2000. Walter wrote the story of the unit and his book is available for sale at Pell. One can visit various sites pictured in the book and relate so easily to the circumstances of the men who lived here.

Many of them honed their skills and there are crafted objects found around the property which were most probably the result of a Sunday-their one day off in the week. The craftsmanship is obvious with the different touches to the structures left as well.

Bill Clark visited with his wife Vera in 2002 and showed me the beautiful set of jewellery he made for Vera whilst he was working at 4RSU Pell. Since then his family sent a crafted ashtray with attached aeroplane made from aluminium of a beyond-repair aircraft.